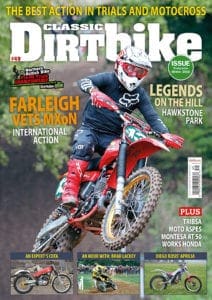 In Balance
Captain Obvious is a UK advert character who points out the obvious to hapless souls… He was needed in the workshop.

News, views and reviews
If it’s happening, going to happen or happened then this is where we get it in…

You need…
… a works bike in your shed. Why? Not just because we say so, but so you can revel in its glory – first is a works Honda MX.

…you also need…
… a works Aprilia trials bike to keep it company in the secure part of the shed.

Dicko’s view
The elder statesman of trials journalism relates the life and times of the Spanish and Italian motorcycle factories.

’cross words
That Mr Berry knows a thing or three about MX, which is why we give him a page here for his views.

Dirt Talk
What’re you talking about in the CDB world? We’ve a packed letters page this time.

Moto memories
Suspension was the area of engineering interest for the MX world in the Seventies. Three inches of movement wasn’t enough… more was needed.

From the archive
It is 50 years since Montesa made their appearance on the UK scene – we look at a few Montesa things and chat to a name or two.

Creating a legend
Putting a Triumph engine in a BSA frame makes a… Beezumph… hmm that name is taken… how about TriBSA…?

An hour with…
… Brad Lackey the American superstar, all-round great guy and guest of honour at Drumlanrig.

Small but perfectly formed
Moto Aspes made high quality machines but they’re quite rare. We spot one in the wild.

This sporting world
We’re in Cumbria, Northumberland too and the legendary Hawkstone Park for a MX, an enduro and the Hawkstone Legends.

Welding
There are many reasons to contact a welder…

Rebuilding to ride
Rapid progress has been made on the bits of our Project 90, a lot of them are in and where they should be.